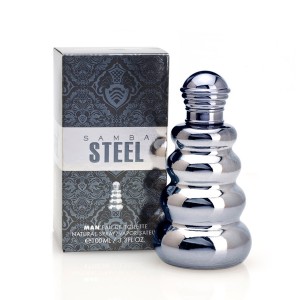 Samba Steel 100ml. Eau De Toilette is designed with artistic precision by Perfumer Pierre Negrin with the idea that “grey is the new black,” ever present. Thoughtfully selecting energetic, masculine notes that unleash sensations of strength and vibrancy, he crafted the embodiment of stylish luxury. With a thread of enticing freshness through Lemon Zest, Fresh Lavender, and Sage throughout, he builds contrast with bursts of addictive warmth. The ideal balance of sleek freshness and bold, raw masculinity is enticing and confident; it is Steel. How do I find relatively recently, researchers in the field of perfumery, those fragrances that are enclosed in the most attractive bottles have the highest sales figures. Based on the data provided, the famous home fragrances Perfumers Workshop decided to launch a duo of male and female fragrances, which would have not only bewitching pyramid, but would be visually appealing. Two new items presented in the framework released collection Samba Metallics. Men's fragrance perfumer workshop samba style - is the embodiment of a strong, self-confident and stubborn difficulties walking toward men. Famous designer fragrances Pierre Negrin managed with the maximum precision to convey a sense of vibration and energetic power coming from the spirits through the most intense in the opinion of men components. The top notes of the pyramid hear modulations of ginger, red apple surrounded by intricate leaf mandarin tones and exotic. Cardiac portion includes light notes of lavender, mixed with hints of rosemary and sage charming. At the base of fragrant creations were placed warm patchouli, tonka bean light. They perfectly complement the classical notes of ambergris, musk and labdanum.