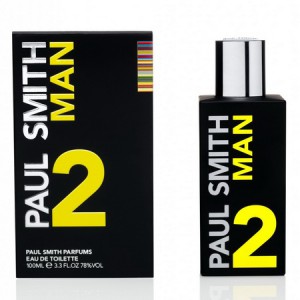 Paul Smith Man 2 100ml. Eau De Toilette by the British brand Paul Smith appeared in August 2010. Masculine woody spicy composition developed by perfumer Fabrice Pellegrin from France. My bottle created by designer Alan Aboud. Exactly one year after the release of the famous composition of Paul Smith Man, a designer from the shores of Albion produces an alternate version of the fragrance. In summer 2010, a strong man with a distinct character are able to get their hands on perfume under the name Paul Smith Man 2. The new scent from the first breath will surprise you with its fresh fruity pressure. It is ensured by the aromas of cardamom, green apple and citrus blotches grapefruit and sweet mandarin. Next comes into play spicy heart component of nutmeg and cinnamon flavor and showy lavender cashmere. The base portion is represented by white musk, sandalwood, cedar wood and tonka beans, which give an incredible seductive perfume. It's safe to say that the composition of the new men's Paul Smith successfully embodies the strong image of the male, the owner is no problem solves the problem, but do not forget from time to time with a head to plunge into romantic adventures and all sorts of fun. Comparing with the previous aromatic perfume creation, we can speak with confidence about the global processing of aromatic melodies. Despite the fact that the scent is positioned as addition, we have two completely different perfume extravaganza, united only by the presence in the composition of tonka bean. But what really has not changed, so it's a bottle, characterized by a rectangular brevity, silver cylindrical cover and two-color print, pointing to the name. Second on the list, but not least, the fragrance Paul Smith Man2, released after the sensational publication of Man, is different in character from its predecessor: in contrast to the first edition of Man, the hero of modern history under the number 'two »Man2 - charming adventurer, daring, bold and absolute confidence in himself and his natural charm. Paul Smith Man2 dedicated to the resolute and courageous people for whom nothing is impossible! They conquer the elements ... and women's hearts! Composition: mandarin, grapefruit, green apple "Granny", cardamom, lavender, sandalwood, cashmere woods, Atlas cedar, white musk, tonka bean. The fragrance was created in 2010. The fragrance is presented the initial notes of grapefruit, mandarin, cardamom and Granny Smith varieties of apples and middle notes of lavender. Snazzy plume of Paul Smith Man 2 made notes of sandalwood, tonka bean, cedar and white musk.