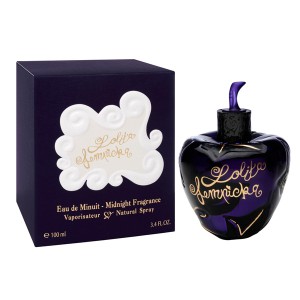 Lolita Lempicka Eau De Minuit 100ml. Eau De Parfum - Make all your most secret desires with this new women's fragrance by Lolita Lempicka! The composition of Eau de Minuit Le Premier Parfum Illusion Noir-Améthyste has all the basic features of the fatal temptation: elegant black bottle color of amethyst, is the personification of the jewels of the new fragrance and decor in the form of ivy leaves black with gold on a path. This perfume is the second in a row flanker brand original composition called Lolita Lempicka Le Premier Parfum (Lolita Lempicka First Fragrance), first appeared on the shelves of perfumeries around the world in 2010 and is an updated version of the very first works of the famous French perfume brand under the name Lolita Lempicka, released in 1997. This new voluptuous, Eastern gourmet flavor begins to unfold refined notes of iris and thick viscous myrrh , followed immediately followed by the heart of the perfume, represented by a mixture of organic notes of jasmine sambac air and warm vanilla. benzoin , which became part of the base notes of the composition, organic finishes Eau de Minuit Le Premier Parfum Illusion Noir-Améthyste, leaving a long and drawn-scented trail.