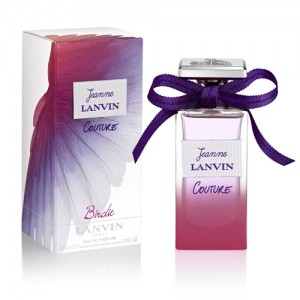 Lanvin Jeanne Couture Birdie 100ml. Eau De Parfum is the new fragrance by Lanvin limitorovanny entered the market in February 2014.  Couture Birdie , "Bird haute couture". This sparkling floral-fruity bouquet will please an incorrigible optimist. Jeanne Lanvin Couture Birdie is an updated version of the song Jeanne Lanvin Couture, released in 2012, and is the latest flavor of the original Flanker Jeanne Lanvin 2008. The new fragrance, designed and created by perfumer Domitille Bertier from IFF. And in 2014, he was released a limited edition perfume Lanvin couture Jean birdie. The material for the new concept of fragrance, according to creative director Alber Elbaz, served as myths about the birds of paradise. On the idea of ​​their luxurious feathers Albert prompted a design boutique showcases Lanvin on Faubourg Saint-Honore. Women who have the luxury of flying ... Women, which can be as free as a bird ... Here's the basic idea that you can feel, if you buy perfume Lanvin Jeanne Couture Birdie. Jeanne Lanvin Couture Birdie is the personification of the free woman, and freedom itself, is the greatest luxury. The new fragrance has kept all the basic characteristics of the original compositions which nevertheless have been supplemented by intensity, elegance and sophistication. The fragrance begins to unfold notes of ripe raspberry and velvety violet leaves evoke thoughts of wet dawn. Heart notes presented in tandem lush peony and magnolia magic, which gradually dissolved in the base notes of rich cedar wood and soft musk. Figure Couture Birdie intensely colored notes of ripe raspberries in the base composition. interwoven notes of spring peony, magnolia and violet green in the final chord sounded white cedar, musk air support. The aroma encourages us not to be afraid to be bright, to give vent to his feelings and spread their wings, like a bird of paradise.