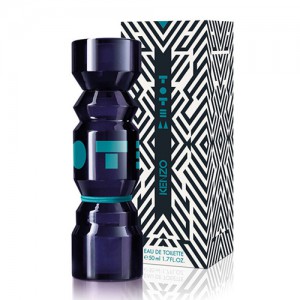 Kenzo Totem Blue 50ml. EDT does not differ from other collection vials nothing but the color of letters, had they logically blue. Design symbolic totem for each fragrance was developed by Japanese studio by Nendo, known for its modern, unusual solutions. Perfume Kenzo Blue Totem designed for men and women and open charge fruity pineapple, orange and lemon, which charge carrier toilet water with positive energy, creating a bright mood. Following sound notes of cardamom and green apple, making it recognizable and interesting composition, and in the end you will feel the aroma becomes warm and cozy, because you will wrap sticky sweetness of caramel, coumarin and white cedar. New items from the fashion house  Kenzo were bright and extraordinary, so deserved a lot of attention. Promotions flavor immediately has to itself, because it does not have the luxury or glamor, but on the contrary, models of different genders and races look like ordinary people, bearing in itself the diversity and complexity of this world. Face Face of a particular fragrance fragrance Kenzo Totem Blue was a girl, and buyers say that this is the toilet water in spite of the "unisex" category still turned out very feminine. Kenzo Totem Blue - elegant spring fern fresh-fruit composition. Luxurious and relaxing aroma supplement their output a unique collection of exquisite perfumes Kenzo Totem, which also includes such fragrant masterpieces as Kenzo Totem Orange and Kenzo Totem Yellow. Totem fragrance line has collected an enormous positive tribe cheerful public personalities from all over the world who are united by freedom and the desire to create, to give each other joy and optimism, and despite the differences make the world beautiful. Cool fruit explosion Totem Blue Kenzo perfume will fill you with wild pineapple incendiary dynamics, combined with spicy cardamom and oriental moods languid wood completion on the basis of white cedar. Eau de toilette Kenzo Totem Blue encased in a distinctive bottle shaped wooden totem to celebrate the simplicity and austerity, goodness and grace.