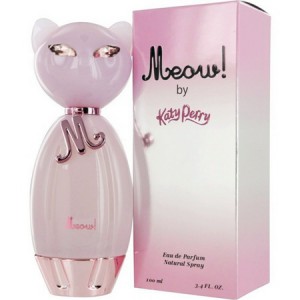 Katy Perry Meow 100ml. Eau De Parfum is playful, sexy fragrance that is suitable for use at any time. Perfume gives a cheerful, bright mood of its owner, the details of its attractive and seductive. Perfume: Givaudan. Top notes of jasmine, gardenia, tangerine and pear; middle notes are orange blossom, honeysuckle and lily of the valley; base notes are musk, sandalwood, amber and vanilla. Did you know that the famous American singer Katy Perry calls his fans not only as Katycats? And given the fact that its premiere perfume composition was named "Purr", it is easy to guess what the vector will be asked for the following flavors. Eau de toilette «Meow», presented personal trademark performer, ready to move you in a magical and unusual mysterious country called Kathy Candyfornia. Miss Perry personally coined the name, composed of two basic words. First - California, where the singer lives. And the second - Candy, that is, sweetie. Caught in the "kill zone" fragrance, you'll be instantly transferred to the sweet Californian paradise, lit warm southern sun. Aroma recognized extremely tasty, pampering his mistress all the splendor of floral, fruity and aromatic gourmet touches. Perfume Katy Perry Meow entered the free market in 2012, despite the fact that the presentation was held at the end of the smell of 2011. It is noteworthy that Kathy invited all members of her own Twitter to guess the name of the new perfume. Ten people correctly identify the word Meow, Miss Perry gave them personally autographed fragrance. And the first one listed title was even invited to a presentation in honor of the release of new perfume. Bottle adorns cat muzzle, and in an advertising company clearly traced cat motifs. Yes, Katie just loves all kinds of cats, and their presence in commercials is not a mere PR move. Houses have private lives star gray striped cat that singer named Kitty Purry.