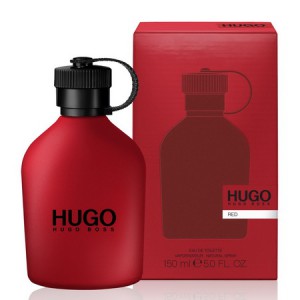 Hugo Boss Hugo Red 150ml. Eau De Toilette is a new eau de toilette for men, released in 2013 by experts of the German fashion house Hugo Boss. Modern cologne is part of the form of spicy oriental fragrance, it faces the confident and successful fans are not afraid of difficulties and who know how to achieve their goals. Red Hugo by Hugo Boss can immodestly called a landmark. It was he who opens a new era in the development of the German brand - in 2013, the perfume division of Hugo Boss celebrates its 20-year anniversary and opens new horizons for themselves, moving from bright to excessive conservatism experiments with form and content. Hugo Boss perfumes always inherent qualities such as modernity and originality, and no exception was Hugo Boss Red. It helps to emphasize the independence of the owner. This perfume belongs directly to the two families - spicy and oriental fragrances. In the composition captured interesting metallic shades present throughout the sound. nature scent Bright colors further emphasize the vial. Carefully selected components of the male perfume together form an exciting, dynamic, full of contrasts melody that want to hear again and again. But for the girls will be a great choice Hugo Woman. Unique men's fragrance Hugo Boss Hugo Red pushes the boundaries and symbolizing the significant progress that is important in the life of every man. The mission of this fragrance is not to repress their own creativity and not be guided only by what they wear, or what pleases others. Faced fragrance has become a popular musician and actor Jared Leto, who is the original fashion icon.