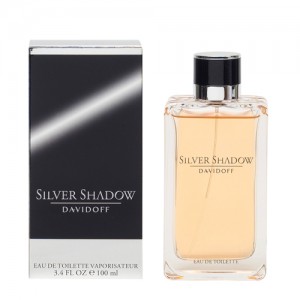 Davidoff Silver Shadow 100ml. Eau De Toilette is a woody-oriental fragrance for men, which was launched in 2005. Listen to the magnificent composition of exotic woods and spices world. Close your eyes and drift current dreaming. You will find yourself in a realm of his own imagination, where nothing is impossible. Toilet Water Silver Shadow will give you a good dose of self-confidence and mysterious sensuality! Scent of premium brand Davidoff becomes silver shadow of your great personality and will complement her sensually. Versatility fragrance Davidoff Silver Shadow has many mystical aspects that attract the views of others. Two magical contradiction lies in the notes of light and darkness. These subtleties describe unusually secretive nature of the holder perfume. But in the heart notes of everything is expressed much easier. Citrus Accord emphasizes charisma and masculinity host odor. A thin trail brings some many women for whom moments of happiness with the owner perfume looks like a night of passionate love. Davidoff Silver Shadow for extraordinary men, the nature of which is impregnated with mysteries and secrets. Davidoff man lives life to the fullest. His experience and maturity gave his extraordinary charisma. He leaves behind a mysterious trail; intense and unforgettable. Its flavor - his signature, a fascinating shadow of his personality. Noble aroma Silver Shadow, emphasizing masculinity and personality inspire mature men who know the taste of life, stepped threshold of the 35th anniversary. This intriguing bouquet for those who are aware that to be a great means always only go their way. Composition Davidoff Silver Shadow make notes of patchouli, cedar and bitter orange, saffron, amber. Begins aroma hints of bitter orange, coriander and cedar needles. Heart notes of saffron and warm up shades of cedar wood. Completes the unforgettable scent trail of amber, patchouli and oak moss.