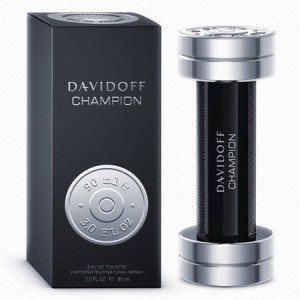 Davidoff Champion 90ml. Eau De Toilette - Taciturn, discreet fragrance Davidoff Champion created for men with excellence and dignity. Fragrance Champion from Davidoff saturated notes of bergamot, clary sage, lemon, oak moss, cedar and galbanum. Fragrance Champion includes six ingredients and one mood that emphasize image with elegant suit and expensive watches. Woody fern perfume Champion from Davidoff created in 2010. Bottle Champion made ​​a dumbbell. This emphasizes restraint, integrity and self-sufficiency fragrance Davidoff Champion . For the real winner, who purposefully moves forward to the selected target. Fragrance Champion will give energy, strength, positive attitude and belief in themselves. Top notes of the composition: lemon and bergamot. Heart chords: clary sage and galbanum. Cedar, oak moss - basic chords. Be confident and purposeful walk to the chosen target - the main task of those who tuned in to become a true champion! Champion, a new fragrance from Davidoff, embodies for people burst of energy produced during a workout in the gym or cross morning. Symbol of this strength of character and courage, Champion gives his owner self-confidence and a positive attitude, giving it strength and stimulating to their full potential. Men's fragrance from Davidoff Champion opens in a man hidden potential. This fragrance basic instinct for victory and power. Davidoff Champion is designed for those who are strong not only in spirit but also in body. Davidoff Champion expresses the hidden potential of every man, which is victory and strength. Scent created especially for men who like to overcome the challenges of everyday life. The original and unmistakable fragrance bottle was ingeniously designed in the shape of men's weights. Introductory notes of bergamot with lemon brings instant refreshment. The heart of the fragrance is energetic essence, that combines galbanum with aromatic sage. The base scent you smell cedar wood with hints of oak moss. The unmistakable aroma of world famous brands Davidoff, reminding you that your goal is to have a main pillar of success. Manly eau de toilette Davidoff Champion uniquely represents the daily ritual of a man who works on his physical and mental strength. Fragrance was launched in 2010.