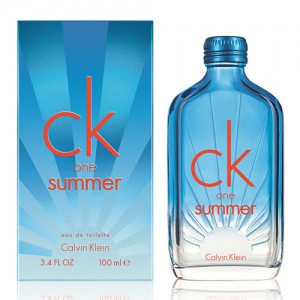 CK One Summer 2017 100ml. EDT - In continuation of its fine tradition of releasing the fragrance every summer, Calvin Klein presents the CK One Summer 2017. The presented aroma differs fresh and cheerful sounding and iridescent juicy nuances. Each component of this perfume, each note charges positive, radiating summer. Even a bottle of blue with a picture of palm trees calls on the seaside to enjoy warm water and salty-fresh air. Together with Calvin Klein CK One Summer 2017 you will feel the true delicacy of pleasure. Top notes: Lime, Citron and Cucumber; heart notes: Saffron, Pepper, White pepper and Ginger; Base notes: guaiac and Musk. CK One Summer 2017 is another summer flanker in the CK collection from Calvin Klein. Recall that for the first time the composition CK One was released in 1994, and since 2004 the brand annually releases a new summer version of the fragrance. In 2017, Calvin Klein invited his fans to the desert, namely - to the popular exotic entertainment, a festival in the desert.