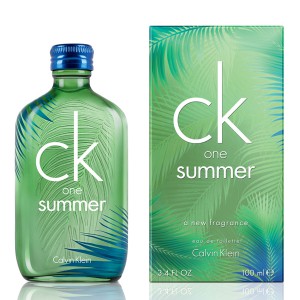 CK One Summer 2016 100ml. Eau De Toilette by Calvin Klein is a perfume fragrance family Citrus Aromatic and is for women and men. This is a new fragrance. CK One Summer 2016 was launched in 2016. Top notes are lemon, lime, mojito, ginger and green apple; Middle notes are guava, tiare flower from Tahiti and juniper; Base notes are cedar, coconut milk and moss. The opening of the summer season, it is not only warming, and filled with beaches, it does, and the discovery of flavors. It is to this year belongs to the flavors and Calvin Klein CK One Summer 2016 - the real trend of the future of the summer season. He will present all its unforgettable mood, embedded in his masters. Citrus and fern, this eau de toilette, you overwhelm the freshness of citrus, lime mood and a mojito cocktail. The expanses of freshness, summer mood, and these miracles, now have your name - Calvin Klein CK One Summer 2016. Enjoying this perfume, like ecstasy, the highest point of which is incomparable to anything fun, and because of its universal sentiment perfume equally well be sitting as on the men and on women.