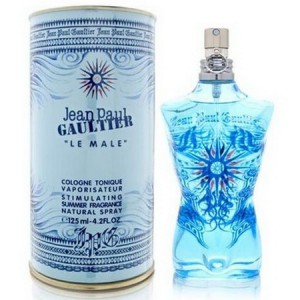 Jean Paul Gaultier Le Male Summer 2011 125ml. Eau De Toilette is a new, alluring and refreshing fragrance for men. Jean Paul Gaultier Le Male Summer 2011 belongs to the family of fern fragrance and was released only recently - in 2011, especially for the beginning of the summer season. This perfume is like a young, confident man, party-goers bright, cheerful seducers. This fragrance is perfect for both as a day, and as a club of perfume. If you like the soft, sweetish, sensual composition, then pay attention to the fragrance unisex Jalaine Vanilla , with subtle notes of French fanili. The composition of the fragrance Jean Paul Gaultier Le Male Summer 2011 sounded notes of Bulgarian lavender, mint blue and green cardamom. At the heart of the fragrance of orange blossoms sounds and steel base notes of musk, vanilla and sandalwood. It is a completely new, refreshing and calling fragrance for men. It belongs to a group of fern fragrances and was released in 2011 specifically for the summer season. The bottle is made ​​of flavor in a recognizable trademark style - a male torso decorated with ornate tattoos that  symbolize natural bravery, courage, mystery and sensuality. Many perfume houses have already announced the imminent appearance of its new summer flavors. Recently, they were joined and the brand Jean Paul Gaultier: specifically for the warm season, 2011, he created a fresh version of the perfume Jean Paul Gaultier Classique and Le Male. They have served as inspiration for a tattoo made ​​the Maori people. This nation has a population of about 660,000 people and comes from Polynesia. But the Maori live in New Zealand, where they arrived around the 13th century AD. Maori art is peculiar, because it develops in almost complete isolation from external influences. The design of both vials present and tattoo motif, and a nautical theme and is decorated with more feminine variation and corset.