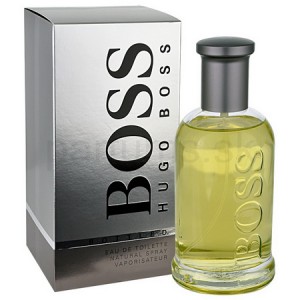 Hugo Boss Boss Bottled 100ml. EDT is a fragrance suitable men of the 21st century. Want to be brave, strong and modern? Then you definitely cherished this scent unusual and very popular. Aromatic essences of plum, apple and citrus highlights the unique personality of each barbat. Sex-appeal is played by extracts of vanilla, precious woods and moss. Final notes of this fragrance are given non-traditional mixture of olive, geranium and bergamot. Hugo Boss brand is well-known for its popular fragrances, both men and women. Not only will you enjoy the feeling of strength and courage but also elegant and attractive. To create a fragrance later known Boss Bottled Hugo Boss, experts from Hugo Boss perfume house was attracted renowned perfumer Annick Menardo. Boss Bottled Hugo Boss belongs to the woody and spicy aromas groups. Composition of perfumers from Hugo Boss is designed for a strong half of mankind. To the top note of the perfume can be attributed German chords plum, oak moss, green apple, citrus, bergamot, geranium and lemon. As heart tones were selected notes mahogany, cloves and cinnamon. Chords of sandalwood, olive wood, vanilla, vetiver and cedar act as base colors. Eau de Toilette Hugo Boss Bottled, established in 1998, celebrated its 10th anniversary in 2008. It has a universal character and is designed for men of all ages absolutely. Equally well suited for a business suit, and for sport. It would be appropriate also on a romantic date. Perfume is suitable for elegant, successful, confident men with warlike character, which are able to set goals and achieve them successfully. This eau de toilette is ideal all. Her bottle has a simple but elegant design, which has already become a classic. Cardboard packaging and cap are made in gray, so that at Boss Bottled Eau de Toilette appeared the second name Boss Grey.