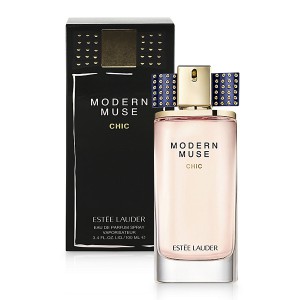 Estee Lauder Modern Muse Chic 100ml. Eau De Parfum for women who Lebeda heavier scents with an elderly subtext. Charcoal intoxication, whose force can withstand very difficult. Aroma that brings olfactory senses to ecstasy and deepens the maximum experience of elegance. Get a strong female weapon. Perfume Estee Lauder Modern Muse Chic direct you to another world. They see to it mostly sounds like a lily, jasmine and cashmere. Through ancient compositions you will achieve essential luxury and become centered all the attention. Modern yet traditional fragrant gem. Vial of scented water for women Estee Lauder Modern Muse Chic has higher performance and bright coloration. Its upper part is decorated with original cap on which there is a combination of black and gold. Treat yourself to a timeless scent with which you wander in the warm and intoxicating dusty veil. There are women who attract attention at once, and they know how to keep it. They are not afraid to experiment with appearance, and are always open to the new. They have nothing to fear - a sense of style in their blood. It seems they never stand for hours in the closet, picking out the perfect outfit. Whatever they put - they look great. These are the modern, stylish young ladies inspired perfumers Estee Lauder to create a fragrance Modern Muse Chic. He turns his head and striking in its composition. From a seemingly simple components they have created a truly stunning set. However, this is consistent with the style of life of their owner. The initial chord as extravagant gourmet artemisia plums and then moves in the "classic" feminine heart of the fragrance. Then combine a heady lily and tuberose. A woody-musky base has absorbed a whole bunch of smells. If the fragrance stand on the skin, you will hear and suede, and vanilla, and "male" note in the form of ebony and cashmere. The aroma of a multi-faceted and fascinating. He argues that its owner - particularly original, and is capable of hitting you, not only your clothes, but also a lifestyle!