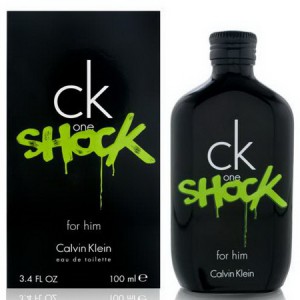 Product Code: CK One Shock for Him
Availability:
In Stock
Price: 1,600.00 Baht

CK One Shock for Him 100ml. Eau De Toilette is a new pair citrus scent that excites and shocking! This is another "remix" on the cult classic unisex perfume released in 1994 - CK One. Until now, a whole lot of fragrances CK One was produced exclusively as unisex, but now we see the exception to the rule - issued two separate perfumes: for it - CK One Shock for Her and for him - CK One Shock for Him. Addressed these spirits as before to young people today who are rebellious summary and morals, they are not so easy to surprise and something even more shocking. Be provocative and admired in others - it is their vocation. CK One Shock For Him is made up of juicy citrus notes, inclusions of the energy drink Red-Bull and fresh cucumber. In the middle, you will hear the spicy shades of black basil, cardamom and black pepper. At the end of the audible patchouli, musk, amber, tobacco and wood. These bold and modern fragrance can be purchased in 2011. this oriental, spicy, musky scent with chords cocktail "Red Bull" for daring young men. CK One Shock for Him Chemicals released in 2011. Top notes of the fragrance CK One Shock For Him by Calvin Klein fragrance of fresh cucumber, citrus clementine juiciness and energizing cocktail Red Bull. Spicy "heart" of the fragrance Calvin Klein One Shock for Him Chemicals consists of black pepper, black basil and cardamom. In fragrant plume dominated woody notes and chords confident tobacco, musk and patchouli, which emphasize the masculinity of its owner. Base notes: Bulgarian lavender, clementine, cucumber, osmanthus, green cardamom, Tuscan basil and pepper, musk, patchouli, amber, tobacco leaf and woody notes. Feature: daring, sexy. Suitable for daily use.