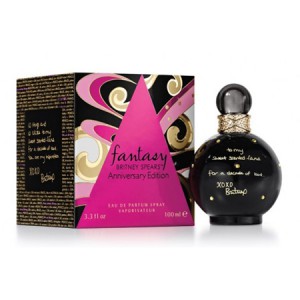 Britney Spears Fantasy Anniversary Edition 100ml. will be released in a festive black bottle adorned with gold sequins, and the package will be written the names of the most committed fans of the singer. Spirits appear with three different labels: ''10 hugs and 10 kisses'', '' To my sweet scented fans for the decade of love '' and '' You are my inspiration '' XOXO Britney. Fragrant perfume composition opens with notes of lychee, kiwi fruit and quince. Continues its floral notes of jasmine, orchid, and white chocolate and cake. And in the end added to notes Muska and orris. For 10 years we enjoy the creations of perfume from the American pop star Britney Spears. Among all creatures, the greatest popularity acquired fragrance Fantasy, released in 2005. It is the release of the compositions Fantasy Anniversary Edition, the singer decided to celebrate the tenth anniversary of its perfume collection. Spirits came out a limited edition, and the first 100 bottles - signed personally by the singer. The author of creation is the perfumer James Krivda. The composition opens energetic consonance of the bright, fruity hues evoke lychee, kiwi fruit and quince. "Heart" of the fragrance pulsates sweet notes charming orchids and shimmering jasmine, mingling with the subtle notes of white chocolate and cupcakes. Completed composition attractive and inspiring sensuality woody notes, iris roots and musk. Britney Spears Fantasy Perfume anniversary edition is in a beautiful bottle of black color, with ornaments in the form of golden crystals. Just a bottle full of messages the singer to his most loyal fans. Top notes of quince, kiwi, red lychee. Heart notes: cake, white chocolate, jasmine, orchid. Base notes are musk, orris root, woody notes.