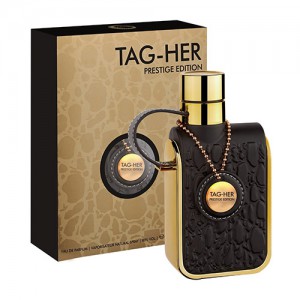 Tag Her Prestige Edition EDP 100ml. The mysticism begins here, hidden in a fancy bottle of Arabian perfume manufacturer Sterling Parfums, the leader in prestigious budget perfumes. Once you hear the smell of Armaf Tag-Her Prestige perfume, you will change your perfume preferences. You will enjoy the mystery of aroma, which in the last century, was the advantage of only a privileged class. Today, in the 21st century, the luxury of perfumes like ARMAF provides an opportunity for everyone, without exception, to witness the heyday of genuine perfumes with an affordable price tag. The cost of cinnamon in the past was expensive and was often presented as gifts to monarchs and dignitaries. From China, cinnamon was imported into Ancient Egypt, where it was used by its rich Egyptians as a flavoring for dormitory rooms. In medieval Europe, cinnamon was imported by Venetian merchants who bought it in Alexandria. And when the Portuguese discovered Ceylon, the production of cassia (cinnamon) by the traditional method was changed. Since then, the fragrant bark of this tree began to penetrate throughout Europe. Its aromatic properties were also noted by medieval perfumers, for whom such an aroma seemed a real mystery. The aroma of orchids is sometimes compared with the smell of expensive exclusive perfumes. The most exquisite fragrance is the Cattleya orchid , which is of particular interest to perfumers. Its unrivaled scent has a truly mystical character with a subtle vanilla haze. The versatility and sensuality inherent in the perfume in the composition, which is this seductive note, endow spirits with charm and a fabulous fantasy meaning. Now about the composition Armaf Tag-Her Prestige . Certainly, it is beautiful and refined; in its aroma one can feel the noble regal shade of expensive French perfume. And although the pyramid consists of only four audible chords, the accents of oud wood, chocolate, cream ice cream, pear in caramel and vanilla strudel are captured in the sounds of the train. A true oriental tale, shrouded in a vanilla gentle haze, reminiscent of the sweet stories of Shaherizada told to King Shahriyar on the pages of "One Thousand and One Nights."