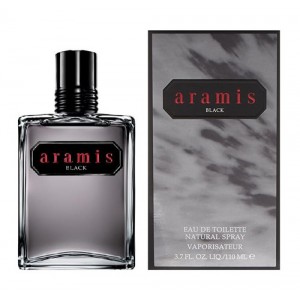 Aramis Black EDT 110ml. is a fragrance for men released by the Aramis brand in 2015. Modern classifiers refer this perfumery composition to the class of wine glasses. According to an official press release, the perfumer’s most recognizable nuances of this creation are: in the initial notes - the mastic tree , grapefruit and elemi ; in the notes of “heart” - juniper, woody notes, cognac ; The base notes include incense , leather chords , tonka beans and vetiver .

In the course of an independent survey, consumer reviews of the fragrance Aramis Black were collected by a foreign publication Flavors & Fragrances. The interview participants were asked to give a subjective assessment of this perfume composition on a number of key characteristics, among which were the first impression of the fragrance, the amount of persistence and the presence of a plume, as well as seasonal, temporal and age orientation.

Based on the data obtained, it can be noted that the overwhelming majority of the respondents agree in the following opinion: the aroma “Black” from “Aramis” has a low resistance, respectively, from 1 to 2 hours, and a small, slightly muffled train. Additionally, it is noted that the subject matter will be an ideal choice at any time of the year for young people, people of middle and elegant age in the morning, in the first and in the afternoon or in the evening. The most positive reviews about the fragrance "Aramis Black" were received from consumers belonging to the following signs of the Zodiac: Aries, Taurus, Gemini, Cancer, Leo, Virgo, Libra, Scorpio, Capricorn, Aquarius, Pisces.