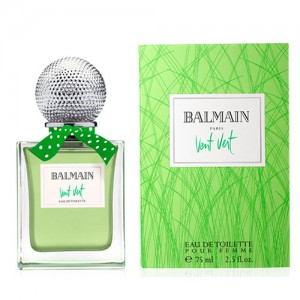 Balmain Vent Vert EDT 75 ml. - This magical story began in the middle of the last century, amid the stellar atmosphere of the Cannes Film Festival, when the Croisette was filled with celebrities and legends of that time. Carrying spring freshness and bright bursts of sunlight, Vent Vert was first born to enchant with the laconicism of its minimalism and captivate hearts with its witching charm. Half a century later, Balmain House reissues its famous masterpiece, investing in it the mystery of the arrival of spring - this elusive and, at the same time, such a clear moment when we realize that winter time is retreating and folding its powers to give way to a new trend - the spring wind . Vent Vert - On the Road to Spring!